The steps below will run through the steps required to modify and Off Shoe Flash Cable so that is can be extended to any length required using PS2 extension cables.

First a PS2 cable is cut in half and the ends stripped as show below. This will allow the 2 plugs to be plugged together or they can be connected using another PS2 extension cable to increase the length of the extension.

To open the camera connector first carefully remove the lable from the top to expose the 3 screws underneath. 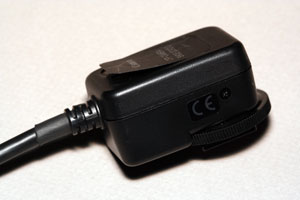 Make a drawing of the contacts and note the colours of the wires connecting to these contacts. Now unsolder the wires to disconnect the cable from the connector. Also unsolder the small black wire that connects from the bracket to the main cable. and remove the ferite cube from the cable. The strain relief grommet is molded onto the cable, but can be removed by carefully inserting a fine jewelers screwdriver between the grommet and the cable and loosening it.

On one end of the PS2 cable, strip back the outer insulation so that the inner cores are exposed to the same length as the curly cable. Strip about 2mm of insulation off the end of each inner wire and tin with solder. The PS2 cable i used was slightly thinner the the curly cable so the grommet was a loose fit onto the new cable. If this is the case, glue the grommet in place with hot-melt glue. Fit the ferrite cube onto the new cable as shown below. Solder the new wires back onto the connector. If the wire colours do not match those in the origional cable, make a note of which wires are connected where so that they can be matched up with the origional wires later. 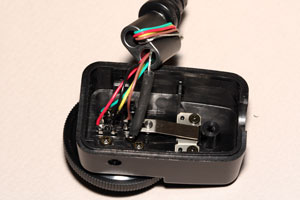 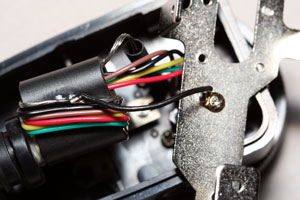 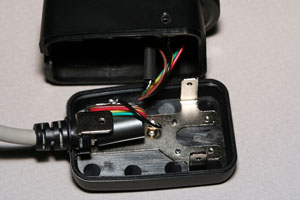 Fit the plastic cover plate back and screw it down. Screw the connector covers back together and refit the the sticker. One half of the cable mod is now complete. 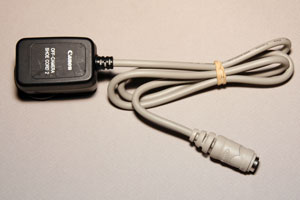 To complete the other connections, you will need 5 pieces of 2mm dia heatshink tubing that are about 12mm long, and a piece of 6mm dia heatshrink that is about 120 to 140mm long. Strip the outer insulation of the other half of the PS2 cable back about 30mm and strip and tin the inner conductors.

Using a heat gun on it's lowest heat setting, shrink the tubing over the connections to insulate them. Take care not to melt the insulation on the wires. Slide the 6mm heatshrink over the joind wires and shrink that using the heat gun. The modification is now complete. The extension can now be made as long as required by adding PS2 extension cables between the 2 halves.